A different definition of 'good news.'

﻿﻿﻿﻿﻿﻿﻿﻿﻿ ﻿﻿﻿﻿﻿﻿﻿﻿﻿
My son Andrew went missing on 14 September 2007. He was 14 years old at the time. His mother and I still have no idea why he chose to leave and have subsequently worked on many theories. All we know is that one Friday morning he emptied his bank account of £200 and took a train from our home town of  to London Kings Cross. There has been no confirmable sighting or evidence that he is alive since then. We think it most likely that he planned a short term adventure but that something went wrong.
Around Christmas time of this past year, my wife and I learned that a new piece of sonar scanning technology could be used to scan the River to see if Andrew might be found there. It was a friend who pointed out to me that when the good news for your family is an opportunity to perhaps find your child’s remains and therefore some sort of closure, it places the rest of your life very firmly in perspective.
Certainly it speaks powerfully of the never-ending nightmare that life becomes for those missing a loved one. Could they have been suicidal and hidden it from you? Could your child have been abducted, murdered, or trafficked? Could some terrible accident have befallen them? These possibilities are the ones that remain in the minds of the parents of a missing child, try as they might to push them aside.
And so it came about, through the efforts of a friend and the generosity of a firm (Liquavision) specialising in underwater search methods that we were the first parents of a missing child in the to carry out a search of this sort. For the technologically-minded we used a Starfish 990F 1.1MHz side sonar scanner - the first to be specifically developed to enable sufficient resolution to identify bodies. The team scanned the river from The Woolwich Barrier to . They found a sunken boat, an upturned car, and many other things that do not belong, but not Andrew. We now at least know that Andrew is not a body in the – it does not resolve the ongoing question of where he might be, but we can take encouragement from the idea that he is more likely perhaps to be alive. 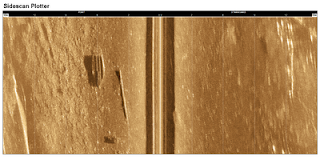 From left: a sunken boat & mast, a fish (white) and an upturned car (left side of image).
Often when people go missing any underwater search involves divers struggling with tides and currents, zero visibility, extreme cold, limited time frames and much personal risk. All these problems are avoided with a scan and unclear targets can be examined more closely by deploying a ROV to take video footage and further scans of the target at close proximity, minimising the need for risk and maximising the chances of successful identification of a body.
I discussed this technology in more detail on BBC Missing 2011 yesterday morning. You can watch the episode here, and catch the one remaining episodes of the show tomorrow at 9.15 a.m..
On top of the emotional nightmare experienced by families of missing people, there is a great deal of practical frustration, with feeling like you don't have the resources or tools to move the situation forward in any way. It is a position of great helplessness. So while this pioneering sonar technology did not bring my family the answers we're so desperate for, I'm keen to promote it as it may prove the key to closure for other families left in limbo.