It’s already a week since International Missing Children’s day and the Big Tweet. This was a bold experiment by Missing People to see if a new medium - Twitter - could be used to communicate an important and not always easy message to a wider audience. It was an approach with the potential to reach many people who were not previously aware of the issue and to create a new channel to be used in the search for the 100,000 children who go missing in the UK every year.
So was it a success? And what did Missing People and the families they support gain from this new tactic?
The results speak for themselves: 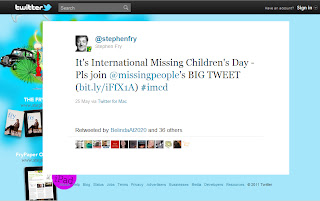 In other words, every goal was hit, if not smashed! Twitter proved itself a hugely valuable tool for spreading the word, and the event generated more buzz than could ever have been hoped for.
But it isn’t just about one day.
Cynics might point out that, in spite of all the buzz, coverage, and celebrity support, the Big Tweet didn’t help find any missing children on the day itself. But I’m convinced it will.
The real success of the campaign was the way that many followers old and new engaged with the issue, calling out to their friends and to celebrities for their support, keeping the tweets flowing through a solid 24 hours and beyond. What’s more, they’ve maintained their involvement, retweeting the ongoing daily missing appeals, and in some cases asking how they can get involved in other ways.
The Big Tweet was a resounding success on the day, and Twitter is now a key channel for Missing People. Most importantly, however, it has helped to create a platform for the future, and this is what social media does best. Now, when an appeal is sent out via @missingpeople, it reaches over 5,500 more people than before, all capable of spreading it still further. Followers can also provide other forms of support that are so crucial to the charity, such as volunteering or conducting local fundraising.
If you’re not already following @missingpeople, I urge you to do so and to pass on the message to your friends, as there is definitely more to come. This is a perfect and very simple example of using social media to make a difference.
I can’t wait for the headline: “Charity finds missing person by using Twitter” – it’s not as far off as you may think. One tweet by the right person at the right time is all you need.
By Gifford Morley-Fletcher
Director of Strategy, Inbound Marketing
Base One, www.baseone.co.uk
Posted by Missing People at 11:57