Rachel Elias: Everyone Deserves a Name 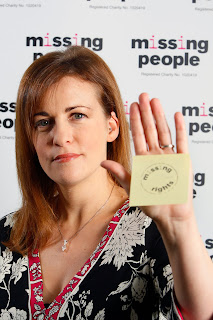 Last week I joined Peter Lawrence, Jacqui Hoyland and other families to give evidence at a Parliamentary Inquiry into missing people and the support for the families left behind when a loved one goes missing. Our belief is that no family should have to face the trauma alone of having a missing relative, and that legislation must be passed so that families have access to specialist support to help them deal with the unique legal, financial and emotional challenges they face when a loved one disappears.

My brother Richard Edwards went missing from London on February 1, 1995. He was 27 at the time. My family and I live in limbo. I describe it as a ‘suspended loss’. When a loved one dies you can find peace in a resolution. But I feel guilty if I grieve, as if I’m giving up on him. Mum and Dad still live in the house we grew up in – hoping one day Richard will come back to find them. It took me years to stop jumping up every time the doorbell went or the phone rang, hoping it was him.

Richard and I were extremely close growing up, even sharing a bedroom until I was 11 and he was 13. He was always looking out for me – the typical overprotective older brother. In May 1991, his band the Manic Street Preachers signed a record deal. Richard was thrilled. But over the next three years, while away on tour, he pushed his body to the limits. In 1994, I was relieved when he checked himself into a psychiatric hospital, but he discharged himself early, so he could go back on tour.

In February 1995, Richard was due to fly to New York for a gig but didn’t turn up for the flight. His manager reported him missing straight away, but the police didn’t take his disappearance too seriously at first. People miss flights all the time…but alarm bells went off in my head. Richard was Mr. Reliable. In those first hours I kept hoping Richard would walk through the door. But as the hours turned into days and weeks, a feeling of cold dread settled in my stomach. Yet even in my darkest moments, I never dreamed I’d still be wondering where he is today.

It was two weeks before the police found his car, abandoned in the Aust Service Station car park of the Old Severn Bridge. While conspiracies and theories rage – there have been alleged sightings of Richard in India and the Canary Islands – I concentrated my search in practical terms. I investigated every lead I could think of. I phoned the hospitals and coastguards, and wrote to monasteries in case he’d run away to a retreat.

After the initial desperate search, my family reluctantly tried to find a body. I contacted coroners around the Severn Estuary to see if any unidentified bodies found in or near it matched Richard’s. I spent days just driving around Cardiff, looking for any clues. I’d climb down to the riverbank and just stare at the water, wondering if my brother’s body was under there submerged in its sediment.

There were many articles in the press about skeletons and body parts that the reporters said belonged to my brother. And then there was the time the police approached us directly as a family to bring us news of the bodies without forensically reviewing the body parts beforehand.

Tomorrow’s final session of the inquiry is an opportunity to explore the systems currently used to cross match unidentified bodies and missing person reports, and I’ll be urging improvements in these processes to ensure as many matches are made as possible. Families of missing people should know that everything possible is being done to find their missing loved one. Whilst this might sound like a very simple objective, many families do not have this basic reassurance. At the moment, there are an estimated 1,000 unidentified bodies at any one time. This represents 1,000 anonymous dead - the un-named and the un-mourned - and the 1,000 families left in the dark about the fate of their loved one.

Cross matching reports of people who remain missing with unidentified bodies or body parts provides an important means of bringing an end to tragic cases. Successful cross matching can also assist criminal investigations, can allow civil procedures to be completed but most importantly of all can allow the deceased - the unknown victims - to finally have their identity restored to them.

I’m giving evidence on behalf of all those who have faced a painful struggle against bureaucracy following the disappearance of a loved one. I urge the Government to take some very simple steps to ease unnecessary heartache and confusion.

To show your support for the families of missing people please leave a message on Missing People’s Wall of Reminders at www.missingpeople.org.uk/wallofreminders.
Posted by Missing People at 11:30