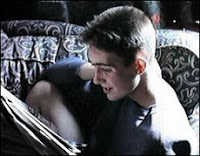 It started as a small idea to help our family to raise awareness and a reward for information about what happened to our son.  It soon became a massive fundraiser and I could never have imagined in my wildest dreams that there would be such an outpouring of support for our family in our search for Damien.

When a person goes missing the focus is on the family.  But friends suffer too, as well as anyone in the community who quietly identifies with the fear and the emotional distress suffered by families.  Our son Damien has been missing for almost 16 years.  We moved away almost 11 years ago due to my husband’s employment, but we have never given up the search for Damien and still believe we can find him.  We have had to work hard to keep this case on the police radar and to make sure it is not forgotten.

We have always had a lot of support from friends over the years.  However, the community where we had lived and where our children went to school has recently rallied around us and shown such love and support, over and above anything we could have imagined.  When Gennive Woolston (she went to school with my eldest daughter) decided organise do a disco to raise funds, she quickly found that the community and local businesses were prepared to offer much more.  They helped arrange a venue at Cowes Yacht Haven and provided an open bar service, and also staffed the event for free.

Local bands flocked to play, again offering their time and talent for free, and a band from London came especially to help support the efforts to raise a reward.  So many people stepped up to the plate.  Local TV and radio, sound technicians and lighting all came to bring this gig together in a very polished and professional way.  It became known as ‘Damien’s Gig’ and posters were placed far and wide.  Social networking spread the word to far-flung friends across the globe. It was even streamed live on the internet allowing my daughter to watch from her home in Seattle and see all her old friends at the gig, who had come to celebrate Damien and help us raise the funds we need.

When I was at the gig I was amazed how many people came.  I knew some of them well, but there were others I had never met before, who follow us on Facebook and came to introduce themselves.  It was heartening and humbling to see so many caring people.  It didn’t just raise money – it raised awareness that our son went out one night and never came home, and that for years there have been suspicions that something more sinister happened.  Anyone who knows the case will be aware that it has become a suspected murder case over the past two years.  It is with this in mind that we decided to try to raise funds for a reward ourselves, as the police had refused.  It created an outpouring of anger and sympathy from everyone, and was the catalyst that brought this gig and a community of people together for a good cause together.

It is just so amazing that so many people care about our son, and the continued efforts of the community and organizations that care for the families left behind.  It helps us to cope and to make our lives just a little easier to bear.

Thank you to everyone who cares for lost and missing people – your support is the wind beneath our broken wings.

You can show your support for the families of missing children by joining the Big Tweet for Missing Children on Friday 25 May 2012.