A few Thursdays ago, I joined Josie Allan, Regional Coordinator, South of England and David Lamb, another volunteer, at our Kingston Appeal Day in the town centre outside BHS, one of our partner organisations, and in the store. It was great to see all the BHS staff wearing our Missing People t-shirts and taking part in raising awareness for our appeals.

We had two main objectives. Firstly, to raise awareness of what Missing People does and to talk to shoppers about two local people who have been missing since 2009; Simon Hickson last seen in Surbiton and Ola Akinbowale last seen in Kingston.

Secondly we asked people to sign up to Child Rescue Alerts; a system designed to alert the public, as quickly as possible, to an abduction or other high risk child disappearance. People who have registered with a mobile phone number and their post code will receive a text in the event of an Alert being issued in their area, asking them to report any sighting to the police.

It was a busy half-term Thursday, with many families out and about, suburbia and sunshine. I saw my own home town in a different light, especially as I’m usually the one avoiding charity reps! We spent time in the store and outside in Eden Walk. 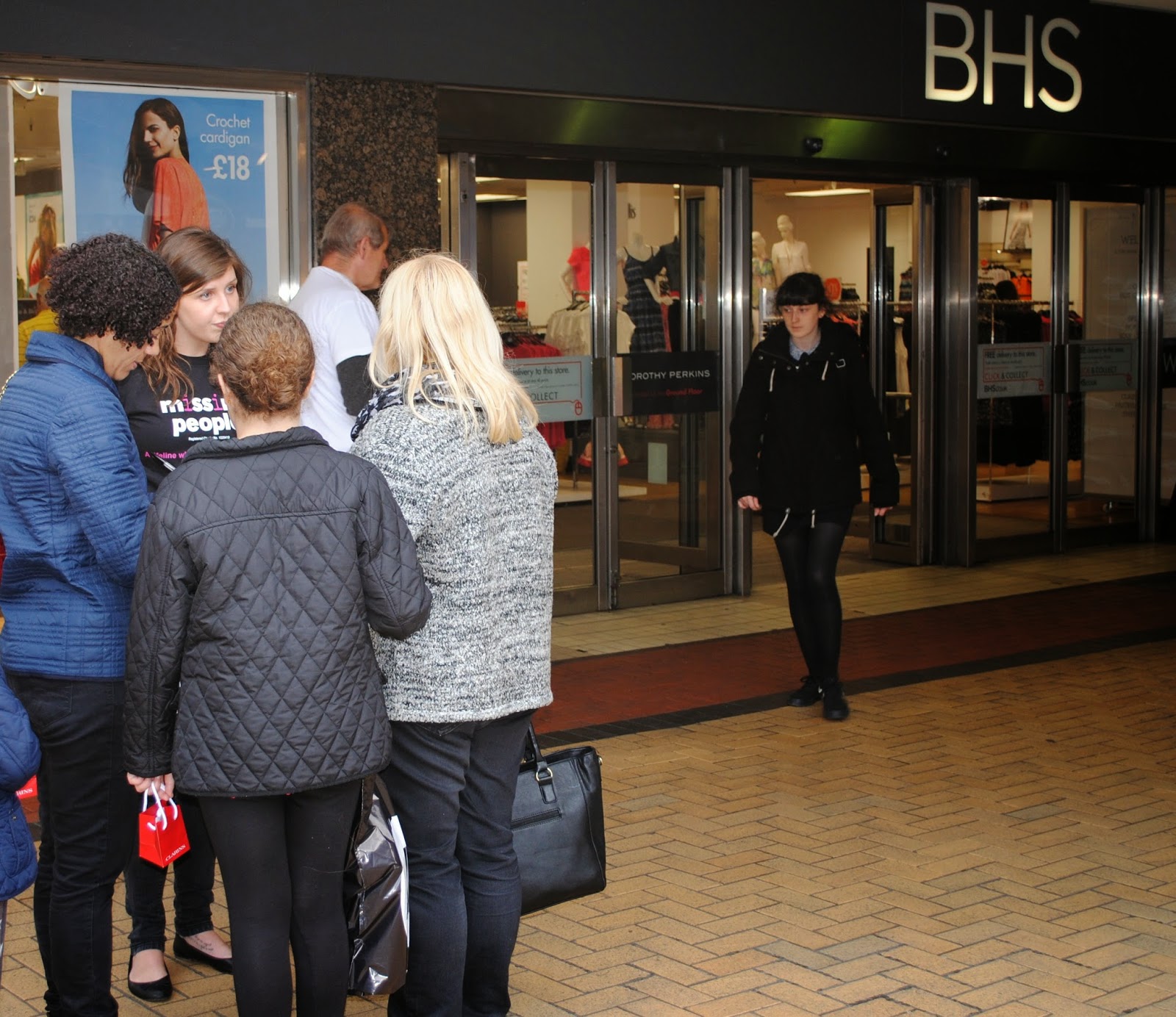 Some people just kept walking. A few stopped, disinterested faces, and rapidly signed up despite appearing not to be listening! A few others let me go into some detail, with keen faces, before carefully saying no, they wouldn’t be signing, sometimes because of privacy concerns. It can sometimes be hard to explain our strict data protection rules in the few minutes you have to talk to someone, but I did my best. The most enjoyable conversations were the ones where people had a genuine interest in finding out more and delved quite deeply, asking how often Child Rescue Alerts would be put into action and under what criteria- and then signed up. At least three of the people I spoke to worked in related areas, and I felt quite tested by very knowledgeable people.

One lady unexpectedly told me that her own son had gone missing twice, though he had returned both times.  I expressed sympathy and asked if she’d been in touch with Missing People at all. She’d never heard of us, she had only contacted the police. I talked about our free 24 hour helpline -116000- and the support we could offer if ever needed.  She took a card, though she hoped she wouldn’t have to use it. She was someone who had seemed disinterested initially and slightly put on the spot, but she was happy to chat.

A young woman in a group was concerned she would be expected to join the search if she received an Alert and said she would feel responsible. Her friend corrected her, explaining that she would simply have to alert the police if she spotted the child. All three signed up. Another person was concerned her phone was too old to receive the text and that it wouldn’t show the photo. I said it would probably be OK, and she would get a description anyway – and if not, she will also receive the alerts via email.


It felt like real grassroots work; a sort of canvassing. There is a genuinely supportive feeling about Missing People. Someone had heard about us on TV, but many people had never heard of us – of these half were definitely interested to hear more. As a Social Media Volunteer, I found it hard work in a non-virtual world to get information across, but perhaps you get a more realistic idea of the cross section of views and interest levels in an ordinary Surrey town.