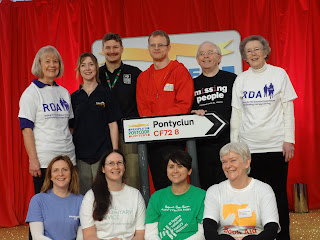 Players of People’s Postcode Lottery have supported Missing People since 2008. We’re one of the lucky 63 causes in the UK and globally supported by players and to date, over £3.4 million of the £91 million raised overall has come directly to us, helping us be a lifeline when someone goes missing. With support from players we can sustain our free, confidential and 24 hour helpline, 116000, for those missing or considering going missing and the families left.

The Postcode Millions draw, held on the last Saturday of each month, came to the beautiful National Trust Dyffryn Gardens in Pontyclun, south Wales on 28 November. Cardiff resident and Missing People representative Mansel Jones went along last Saturday to meet and thank lucky winners from the postcode CF72 8FG. Statistics from the UK Missing Persons Bureau show 6,204 missing incidents reported to South Wales Police each year. Through our services, including our helpline, we provide help and support to missing people and their families. Family members like Mansel, whose cousin Ross disappeared in 1965.
“My cousin Ross Evans from Aberdare in south Wales went missing from his hall of residence at University of Bristol 50 years ago this month (November 2, 1965). He was a medical student seemingly happy and coping with his work. His family have never heard from him since and there’s been no clue as to his disappearance.  Had there been an organisation like Missing People at the time, I’m sure my relatives would have had greater support in their deep anxiety and, possibly, some answers. The charity Missing People is a lifeline when someone disappears – the kind of lifeline Ross’s parents, brother and sister, and other family members could have done with back in the 60s and in the years that followed. It’s a wonderful, much-needed charity and deserves our support.”

Missing People Chief Executive Jo Youle said ‘We can’t thank players of People’s Postcode Lottery enough for their continued support, helping us be a lifeline to missing people and their families in Wales and the rest of the UK.  They make a vital contribution to our cause and we are thrilled when they win life-changing sums of money”.

For more information about People’s Postcode Lottery, see their website.
Posted by Missing People at 16:29