GP is three-peating the London marathon for his uncle Edwin 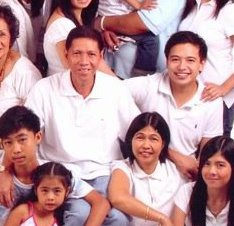 GP, one of our 2018 London Marathon runners, writes a beautiful post; giving a real insight in to how if feels being the loved one of a missing family member. He talks about how running has helped him cope during this difficult time.


My name is GP, and I’ve had a loved one go missing. It’s a sad end to a sentence, and one I hope many of you will never have to use. However, the sad reality is that some of you have said it; some of you are currently saying it; some of you may say it in the future. In my case, it’s my uncle: he went missing on 20 April 2012 while on holiday in Vietnam. He left behind a wife, two daughters and a son.

The first few days after he went missing were both the fastest and most agonisingly slow. I was living in Cambridge at the time – the rest of my immediate family were in London, and my mum (my uncle’s youngest sister) would call or update me via text. After a week of feverishly looking at my phone each time it vibrated and feeling that crushing sense of despair when the news remained unchanged, I felt the weight of the situation crash down on me. I put on my trainers, chose a pretty morose playlist and went for a run.

It’s been a few years since that first run but I can remember it vividly. It was a spring evening; neither too hot nor too cold, and a clear sunset as there wasn’t a cloud in the sky. Under any other circumstances, it would have been quite a lovely run along the river Cam. But as my feet pounded the trail and the music played in my ears, all I could think about was where my uncle could possibly be. Was he ok? Was he trying to find his way back to somewhere familiar, in an unfamiliar place? What was he feeling when he left? Running gave me something to do while I was thinking these thoughts. I didn’t have any eureka moments, but it certainly helped to channel my helplessness and pent up energy while my mind raced.

I made contact with Missing People to see how the charity could help. The advice we were given was invaluable: while they couldn’t help the search directly (my uncle isn’t a British citizen, nor did he go missing in the UK), they pointed us in the right direction and offered support. I also found out that they had places for the 2013 London Marathon, and so with my good friend Jenny Thornton, we raised over £4000 between us and ran the 26.2 miles. The following year, I got a ballot place for the marathon and decided to fundraise for Missing People again, raising just over £700. This year, my 26.2 miles go to my uncle once more.

It’s easy to let hopelessness creep in when you’re sitting waiting for news. While running didn’t give me any answers, it helped me process my thoughts. I can only hope that it helps you to process yours.


You can donate to GP here: https://www.justgiving.com/fundraising/gpmaradone

You can find out more about GP's missing uncle Edwin here: https://www.facebook.com/EdwinBONGdelaCruz/