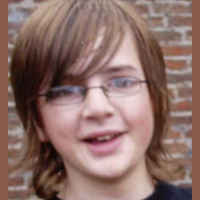 This year, we are launching #FindEveryChild week. With over 80,000 children being reported missing in the UK every year, it's important that we're able to offer our services round the clock. Our helpline supports young people who are at risk of harm, as well as the families desperate for answers. We have been speaking with some of the families whose children have been missing for a long time. Andrew Gosden has been missing since September 2007. His parents, Kevin and Glenys, have shared their story below.


Andrew was an academically gifted, deeply thoughtful and, apparently, always-contented boy growing up.  He was quiet and would think about things deeply.  Andrew possessed a great sense of humour and was always capable of making us laugh.


14th September 2007.  Friday.  My last words with him took place on the doorstep.  “See you later.”  “See you Dad.”  We never did.  We later pieced together that he never went to school that day, the first day he had ever missed.  He changed out of his uniform, went to the station where he bought a ticket to Kings Cross and then apparently disappeared off the face of the earth.


I have somehow “coped” thanks to the incredible support around me.  I continue to struggle on a daily basis with mental health issues and there is never a day that Andrew is not on my mind, but if I had to point to the most therapeutic strategy, I would say that it is giving - whether of my time, skills or money.

Missing People has supported us relentlessly from the very beginning. Some of these have been “big” things like publicity campaigns such as the Big Tweet, Find Every Child posters; and last year, an appeal at a streaming of a Muse concert and an age-progressed image of what Andrew might look like now.  Some of these have been “little” things: the email from Jenny (our support worker) without fail on Andrew’s birthday and the anniversary of his disappearance.  The online family forum, annual family days, the fact that you know the helpline is always there any day, any time.


Obviously, our first hope is that Andrew is alive and well somewhere and will, one day, contact Missing People to let us know this. Soberingly, our second hope would be to find some remains of his body if that is to be the outcome, so that we could grieve for the son, grandson, nephew, brother we all love so dearly.

In the absence of either of these hopes, our hope is that, in the future, fewer families will have to deal with what we have endured for so long by being aware of the services offered by Missing People.  Everyone knows to call the Samaritans if they are feeling suicidal.  I want everyone to know to call Missing People if they are thinking of going missing, or have done so.  Everyone faces tough times in life at some point.  Things that may make you want you to just get away from the situation.  I think most people can understand that feeling: we want them to know where to turn for help and support.


We rely on donations to enable us to deliver these vital services, to keep our 24-hour phone line open and to help Find Every Child.

A donation of £10 today could help us answer a call from a missing child who is likely to be feeling confused, scared or isolated with nowhere else to turn.

Email ThisBlogThis!Share to TwitterShare to FacebookShare to Pinterest
Categories: Find Every Child, Words from Families